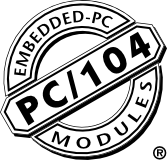 The PCIe/104 OneBank utilizes a smaller, lower-cost bus connector which is compatible to the full size PCIe/104 connector currently in use today. It allows designers to stack boards using a complimentary format that frees up PCB real estate for additional components as well as potential cost savings.

The history of the stackable PC/104 architecture is tightly coupled to the concept of building on the foundation of the PC market as defined by the major processor and peripheral chip manufacturers. This began with the ISA bus (PC/104), then the ISA and PCI buses together (PC/104-Plus), then the PCI bus only (PCI/104), and then the PCI and PCI Express buses together (PCI/104-Express). For additional room on a module, the PCIe/104 format removes the PCI bus. This roadmap allows maximum use and leveraging of the vast resources and economies of scale of the PC community in both hardware and software development. It also allows maximum backward compatibility with minimal stacking overhead, if any, and allows future bus advancements as technologies develop and mature.

The origin of the OneBank option to the stackable PCIe/104 bus comes from the desire to minimize the resources needed for a given application. The standard PCIe/104 bus allows for maximum bus feature flexibility. It consists of a three bank connector with 156 pins and is available as either a Type 1 or Type 2. Both Type 1 and Type 2 have a common feature set and pin assignments which include: Four x1 PCI Express Links, Two USB 2.0, ATX power and control signals: +5V Standby, Power supply on, Power Good, Power: +3.3V, +5V, +12V, SMBus. Type 1 has the common feature set plus one x16 PCI Express Link that can be configured as two x8 Links or two x4 PCI Express Links dependent on the host. Type 2 has the common feature set plus two x4 PCI Express Links, two USB 3.0, two SATA, LPC Bus, and RTC Battery. With speed capability up to PCIe Gen 3, developers are given plenty of bandwidth for the future.

The OneBank connector concept consists of removing two of the three «banks» of the standard PCIe/104 connector, resulting in a 52-pin connector as opposed to the full-size 156-pin connector. The OneBank connector is positioned so that it will plug into the bank 1 of the standard PCIe/104 connector. Thus, the signals of the OneBank include the same four x1 PCI Express Links, Two USB 2.0, ATX power and control signals: +5V Standby, Power supply on, Power Good, Power: +3.3V, +5V (reduced current) as found on the first bank of the standard PCIe/104 bus making them plug in compatible. This preserves the stackability and compatibility of PCI/104-Express and PCIe/104 modules along with the new OneBank modules. By removing two of the banks, 0.513 in2 of PCB real estate on each side is freed up. And with speed scales up to PCIe Gen 3 on the PCIe/104 bus, developers are given plenty of bandwidth for the future even with just four x1 PCIe links.

As with all of the stackable buses adopted by the PC/104 Consortium, the PCIe/104 OneBank connector can be immediately incorporated across the Consortium’s 104™, EPIC™, and EBX™ form factors. In addition it can be utilized on other form factors not housed by the Consortium to provide convenient, cost effective mezzanine I/O expansion.

For more information about the PCI/104 Express & PCIe/104 specification and the newest OneBank option and how they are incorporated onto the 104™, EPIC™, and EBX™ form factors, and to download a free copy of the specification, go to www.pc/104.org

Longevity is one of the hallmarks of the PC/104 Consortium’s technology. Many customers require the stable, long-term supply that PC/104 module vendors offer. PC/104’s reliability is valued by thousands of OEMs in application areas such as industrial control and instrumentation, military and aerospace, and medical. The compatibility of OneBank with existing PCIe/104 products helps to preserve customers’ investments in product designs while opening additional opportunities for cost savings, high levels of integration, and system expandability.

About the PC/104 Consortium:

The PC/104 Consortium is the focal point for the entire PC/104 industry including manufactures and OEMs. It provides a place for information on current specifications, product offerings, news, and events and a place to advance and develop specifications that are consistent and stable for long term use.

The PC/104 Consortium and standard were established in 1992. PC/104, in use since 1987, is a small form factor, embedded PC physical and electrical interface standard. It provides embedded system designers with an architecture that is dense, cost effective and based on proven, practical technology. PC/104-Plus, an extension that was added to the standard in 1995, incorporates PCI technology. A PCI only version, PCI-104 was incorporated into the specification in 2003. EPIC form factor, a mid-sized format that supports PC/104 and PC/104-Plus was adopted in early 2005. PCI/104-Express and PCIe/104 were adopted in 2008 with Type 2 introduced in 2010. The latest addition, OneBank, was adopted in January 2014.