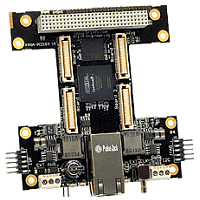 The FPGA-PCI104 is PCI-104 compliant and has a full PCI 2.2 interface. The on-board FPGA is configured via the on-board EEPROM, ISA/ PCI bus, or the JTAG port. The configuration EEPROM can be programmed, independently of the FPGA, over the PCI-104 bus or via the ISP port.

The FPGA-PCI104 is based on the Altera’s Cyclone FPGA family: 4K, 12K or 20K logic element parts. Altera’s free Quartus-II basic FPGA design software can be used by the end-user to define the circuit/system functions to be implemented in the on-board FPGA.

The FPGA-PCI104 have an on-board real-time counter/clock with SuperCap backup, and a unique read-only 64-bit serial number ROM. Included on the FPGA-PCI104 are the connectors and physical layer circuits for a I2C/SMBus. Also included are a 60 MHz oscillator, and an SMB connector for an external reference frequency source.

The FPGA-PCI104 is powered from the PCI bus, or external 6V DC to 18V DC supply. Temperature range is 0°C to 85°C.
Login / Registration