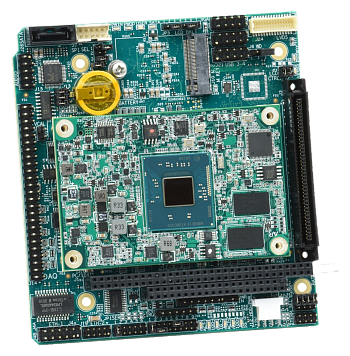 Athena IV is the fourth generation in the Athena family of rugged, wide-temperature PC/104 SBCs with Integrated data acquisition, extending back to the original Athena in 2004. Athena IV is an excellent choice for:


Advantages of a COM-based architecture
Athena IV uses a COM Express Type 10 «mini» Computer-on-Module (COM) to provide the core CPU functionality, mounted on a carrier board that provides the PC/104 expansion and the remaining I/O circuitry.

The use of a COM instead of a directly soldered CPU circuit provides several key advantages and benefits:

Maintaining a legacy for long life applications
Each generation of Athena maintained the same physical shape and most of the I/O connectors and features of the previous generations, while updating key features to stay current with the state of the art. In this way the Athena platform has maintained a low-impact migration path for customers with extended product lifecycles that outstrip the lifetimes of the CPU. Many customers have been able to maintain their products for up to 16 years as a result.

Integrated Data Acquisition
Athena IV is a member of Diamond’s 2-in-1 series of SBCs with integrated data acquisition. For applications requiring precision analog I/O, a 2-in-1 SBC is an ideal choice because it reduces the number of boards in the system, resulting in a system that is smaller, lighter, lower cost, and easier to assemble and maintain.

The data acquisition circuit on Athena IV includes 16 channels of 16-bit A/D, 4 channels of 12-bit D/A, and 24 channels of digital I/O. The analog inputs feature single-ended and differential configuration, programmable input ranges, and fault-protected channel multiplexors to protect against overvoltages. The D/A channels feature programmable output ranges and simultaneous update capability. Both A/D and D/A circuits include Diamond’s advanced autocalibration technology, enabling the board to be quickly calibrated in software without the use of trimpots that are subject to tampering, mis-adjustment, or shock and vibration. The A/D and D/A circuits feature lower noise, higher bandwidth, and more configuration flexibility than competing analog I/O circuits.

All Diamond’s analog and digital I/O circuits are supported by our Universal Driver programming library for Windows and Linux. This software package includes a suite of demo programs in source and executable form. A convenient GUI program supports quick and convenient operation of all I/O features and can be used for rapid prototyping as well as system debugging.

PC/104 expansion
Athena IV uses the rugged and widely supported PC/104 ISA bus for I/O expansion. Choose from hundreds of I/O modules from vendors all over the world, including our own extensive selection. Although the board has both top side and bottom side PC/104 connectors, bottom side mounting of I/O modules is preferred to avoid blocking airflow over the top-side heat sink on Athena.

Development Kit
Development kits are available to support quick project startup. Each kit includes the Athena SBC, a cable kit, and a programmed 64GB flashdisk with your choice of Windows 10 or Linux operating system, ready to run. Simply plug in the flashdisk, attach the cables, add your keyboard, mouse, and display, and you’re ready to boot into a fully functional OS. Configuration files and instructions are provided to rebuild the OS with your application. The Linux kit includes all the tools needed to rebuild the OS. The Windows 10 kit includes a runtime license.

Cable Kit
Athena IV is designed to use most of the same cables as previous generations of Athena, along with upgrades for the latest technology. New with Athena IV is a second gigabit Ethernet port which is backwards compatible with the original board’s 10/100 connector along with a USB 3.0 cable.

Cables are normally sold as complete kits. Individual cables may be available in some cases or may be ordered with minimum order quantities; contact us for details.

Product Configurations
Athena IV is available with a COM featuring the «Bay Trail» E3845 quad core 1.91GHz CPU with 4GB soldered RAM. Contact us for information about other processor options. The board is available both with and without the integrated data acquisition circuit.